We would like to offer our sincere support to anyone coping with grief. Enter your email below for our complimentary daily grief messages. Messages run for up to one year and you can stop at any time. Your email will not be used for any other purpose.

Share a memory
Obituary & Services
Tribute Wall
Read more about the life story of Karen and share your memory.

Karen Lee Stamm was a caring wife, mother, grandmother, sister, and friend. She left this world suddenly on November 11, 2022, in Columbus, OH at the age of 67.

Karen was born to the late Harold E. “Bud” Summers and Mary Katherine (Schluep) Summers on July 21, 1955, in Columbus, OH. She graduated from Northland High School in 1974 where she played the flute and piccolo in the marching band. She held a chair in the Symphony Orchestra for a short time, but instead, chose to pursue motherhood. Karen married the late David Allen Stamm on December 1, 1973, at Linden Lutheran Church in Columbus, OH. Together, they had two daughters: Billie Jo and Wendy.

She attended Bliss College of Business in 1984 where she received a bachelor’s degree in accounting. She worked in the claims department at Insurance Agency of Ohio and was soon promoted to a supervisor role. In the early 90s, Karen stepped away from her accounting career to start her own business. She owned and operated Sister’s Tanning in Hilliard, OH for several years. Karen and her husband went on to own several other small businesses which allowed them to travel the world. They spent a month in Spain, Indonesia, Germany, and rode trains all over Europe. Her favorite place she traveled to was Amsterdam in the Netherlands.

Above all else, Karen’s greatest joy in life was being a grandmother to her granddaughters Aubrey and Charlie and grandsons Allen, David, Anthony, and Aaron. She came alive when they were born and loved each one of them fiercely. Her life then revolved around her grandchildren, and she did all she possibly could to make sure they had the best childhood. There isn’t anything she wouldn’t do to put a smile on their faces. She was known to be the “cool” Grandma and many of her grandchildren’s friends also referred to her as Grandma. She was so proud of each one of them and took pride in getting to be there through all their “firsts.”

Karen’s life was full of adventure, mystery, and magic. She lived every day as if it was her last. She had a big contagious smile and never knew a stranger. Karen was a Godly woman, and she was never afraid to speak her mind. She was 4’11” but stood 10’ tall.  She loved her dogs, country music, and Cleveland Browns football. To say Karen was one of a kind is an understatement. She will be so deeply missed by her family and friends.

Karen was preceded in death by her husband David Allen Stamm and her parents Harold “Bud” E. Summers and Mary Katherine (Schluep) Summers.

Karen is survived by: Daughters Billie Jo and husband Chuck Derfer of Columbus and Wendy and husband Gary Rains of Columbus; Grandchildren Aubrey Rains, Charlie Derfer, Allen Rains, David Derfer, Anthony Rains, and Aaron Rains; Brothers David and his wife Rose Summers of Delaware, Dan and his husband Blaine Wright of Delaware; a host of other relatives and special friends.

To send flowers to the family or plant a tree in memory of Karen Lee Stamm, please visit our floral store. 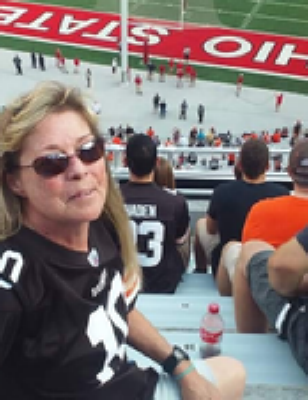 In Loving Memory Of

Look inside to read what others have shared


Family and friends are coming together online to create a special keepsake. Every memory left on the online obituary will be automatically included in the book.

You can still show your support by sending flowers directly to the family, or by planting a memorial tree in the memory of Karen Lee Stamm
SHARE OBITUARY
© 2022 Edwards Funeral Service. All Rights Reserved. Funeral Home website by CFS & TA | Terms of Use | Privacy Policy | Accessibility